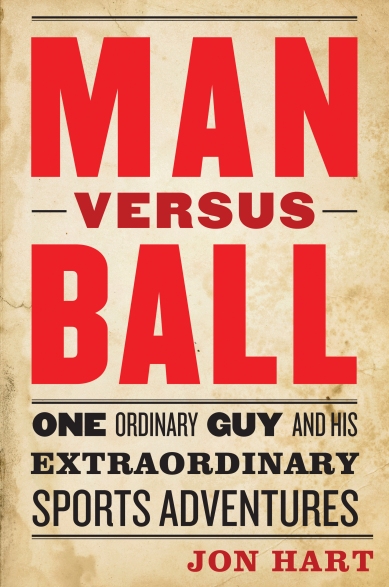 Several months ago I got an email from New York comedian Brett Eidman, who had been a guest of ours in this very same segment. He wanted to know if I would be willing to read a book that a friend of his had written about his series of encounters with the world of sports entitled “Man Versus Ball:  One Ordinary Guy and His Extraordinary Sports Adventures”. I’ve never been one to turn down a free meal – or in this case a free book – so I agreed.  Shortly thereafter, I received a package that included the book.

The first section of the book was a very quick read for me. Author Jon Hart had documented his experiences with a semi-pro football league that – for lack of kinder words – wasn’t very well funded. Being a huge football fan, I was shocked to learn just how many of these leagues were present on the East Coast during the late eighties and early nineties. Our obsession with American football in this country is mind blowing, so much so that before I picked up this book I had almost forgotten there was a time where head trauma was considered to be a job risk that went with chasing legendary status. He led with the heaviest subject matter possible and it dragged me right to hell along with it.

Throughout the book, bizarre stories about the experiences Jon Hart shared were brought to life by assigning nicknames to those who were front and center while he either rode the bench or carried the equipment. It’s very similar to the manner in which players from the Seattle Pilots were described in the book “Ball Four” by Jim Bouton, and I found myself assigning faces that I had encountered in my own life to the individuals in the stories present. Another similarity in the two authors was that the events in Bouton’s life which were represented in that fucking unbelievable piece of American literature took place during a time where he was “past his prime” or in the “twilight” of his career. Hart never had a career in major professional sports, but these experiences he documents are very representative of a guy that refused to let himself be taken out of the sports landscape.

Stubborn? Sure…but here again, isn’t that what every coach you’ve ever had in your entire life has preached to you since day one? Never give up. No matter how far behind we are in the game, don’t quit. And for the love of God Ryan, you can’t have a soda from the cooler until after the game. I know this because I was the guy that rode the bench. I wasn’t even a starter in grade school, so I can definitely relate to the little guy. I was such a pussy as a kid that when my orange and blue car lost at the soapbox derby, I proceeded to burst into tears because I was eliminated in the first round. After I went and sat with my best friend Perry – who probably didn’t want to be next to me after that pre-pubescent display of ovulation – his mother came over and whispered something in his ear. When I asked him what she said after she left, he said “Just don’t do what you just did”. (Thank God just a few years later I would develop a strong love of overtly Satanic death metal, which is an ironic thought in and of itself…)  Long story short, I was never cut out to be a sportsman in any definition of the term.

But what exactly defines a sportsman? More than never giving up? Is it that will to be dominant over your enemies? Is it the girl sitting in the bleachers, who in all reality is…probably not looking at you? Maybe, but under all of that shit is the desire to belong. To be a part of something greater than yourself, as cliché as that might sound. Even if that thing might not be greater than what you are individually capable of, it’s bigger than you to you in your own mind, and sometimes that’s enough. So am I a sportsman?

Well, let’s not go that far. Have I ever had a tennis ball whizz by my head at over a hundred miles an hour? Nope. Have I ever applied to sell soda at a Quad City River Bandits game? Hell no. Do I know anything at all about wrestling to the point where I’ve actually went to a school where the objective is to participate in a match at the local level? I think any of my recent interviews with wrestlers can answer that so I don’t have to explain myself. And would I ever consider being a mascot for the entertainment of others? Have you read the way I bag on furries on this site?

Hart at least had the stones to pick up these balls, and at times risk severe injury for the sliver of glory that might come with doing so. By now, you’re probably thinking “Jesus, are you gonna blow smoke up this guy’s ass all day so we’ll go out and buy this book on Amazon?” Sort of, but to be fair let’s just say I’m glad the golf chapter was very short. (You can’t win them all, but that’s kind of a running theme throughout this book) But overwhelmingly I found myself to be continuously delighted by Jon’s stories that brought to life several corners of the world that I would have never known about. Do you know that skyscraper racing is a thing? You do now.

Everyone who has ever watched sports has envisioned themselves as a hero in their own mind at least once, no matter how trivial it may be. But this book is more about the unsung heroes of sports, the ones that keep the machine moving despite the lack of multi-million dollar signing bonuses that typically accompany their line of work. There’s a certain amount of “facelessness” that gets lost in the individuals who participate in sport simply for the love of the game. But these people are heroes in their own right:  They coach youth sports, they sell hot dogs in the stands of the minor league ball parks you frequent, and they believe in ideas and other things that most of us have let go of a long time ago. I’m going to be thirty-six in a couple of months, and I can’t tell you how many of things in this read that I would never consider doing in a million years. Hart truly did “take one for the team” and by the team, I mean those of us who wouldn’t take the chances he did.

Overall, I am really glad that I read this one. Hell, I can’t think of another instance where I haven’t lost interest reading about tennis. That’s why I was happy to fork over six dollars for a pretzel – even if he didn’t give me a side of cream cheese as dipping sauce – and get the opportunity to discuss this piece of reading fodder with the author of “Man Versus Ball”, Jon Hart, in this very special edition of our artist profile series. END_OF_DOCUMENT_TOKEN_TO_BE_REPLACED 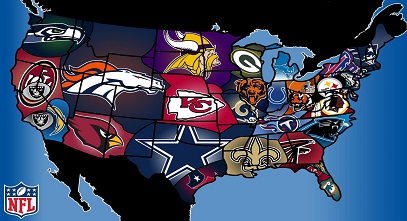 by Ryan Meehan
We’re just a little over seven weeks away from the beginning of the 2014-2015 NFL season, and I sincerely hope those seven weeks fly by. Let’s face it, this is the down time for the sports world. While the remainder of February and the entirety of March seem like they drag on forever, believe it or not July and the first half of August are even worse for sportswriters. So we’re going to go Deep Six on this one and explain why every one of these factors make the time leading up to the NFL season seem absolutely torturous.

END_OF_DOCUMENT_TOKEN_TO_BE_REPLACED

Our readers know that the FOH staff have a common disdain for ESPN and the joke of a network that they have become.  But on the flip side their website is still the easiest place to get caught up on the scores of your favorite teams.

This morning I was greeted with this double gem of a side bar: 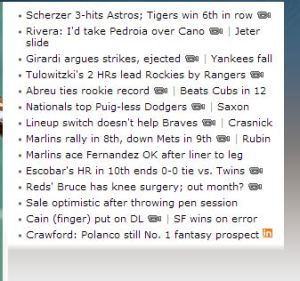 Within the top two stories is a clear Manufactured store/contorversy that ESPN is trying to generate so that they can write 10 articles and talk about it on every worthless show that they have in the afternoon, featuring some loudmouth know-it-all.  Does anyone care who Mariano Rivera would pick for his fantasy wiffle ball team?   Or what toppings he might put on his pizza?   Nope, but you can count on ESPN to turn this in to “big news”, that is for sure.

Secondly I leave you with this gem of an oversight:  “Escobar’s HR in 10th ends 0-0 tie vs. Twins.”  So let me get this straight.  The Twins lost?  I thought Eduardo Escobar played for the Twins……Maybe the Indians where a man short so they borrow Escobar for an inning…………..I am so confused.  I’ll leave it to our resident Cleveland Indians expert Coach Ryan to clear this up. 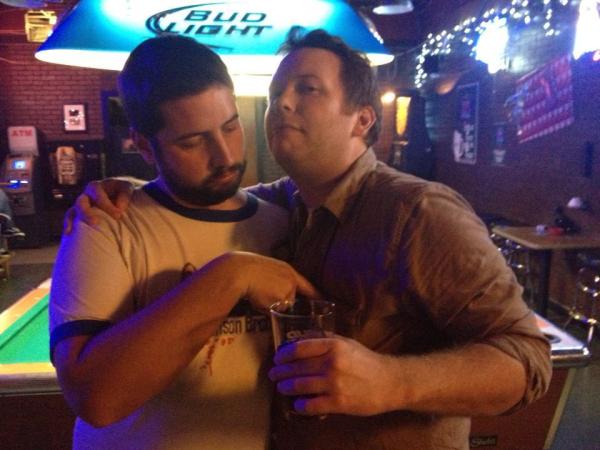 By Cal Meacham and Coach Ryan,

Last Tuesday we brought you our AL picks where we both agreed that the Tigers are the team to beat in the American League, but what of the dominant National League. Keep in mind the American League hasn’t won back to back World Series Championships since 2004 & 2005. As a matter of fact the NL has won 3 out of the last 4 World Series with the cream of the NL crop being the Cardinals who have have been to four Fall Classics since 2004, winning two.

END_OF_DOCUMENT_TOKEN_TO_BE_REPLACED 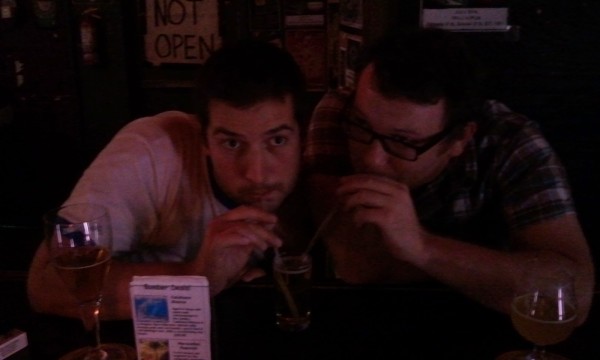 By Coach Ryan and Cal Meacham,

While some professional prognosticators would have you believe that they have a clairvoyance on par with Dr. Manhattan, others just cover themselves on both ends (here & here) so that they can say that they were right.  We at FOH can tell you up front that we claim to be neither of those things.  Instead we have derived a formula that involves equal parts baseball knowledge, love for our hometown teams and Yuengling.

The more Yuengling and craft beers we drink the more we like discussing our predictions and takes on everything you can find on our site. For Cal and myself, seldom do topics get us debating as much as baseball. We both are fans of the AL Central, and although we may root for different teams we still try to be somewhat realistic with expectations as we praise or critique players and teams around the league.

Today, we bring you our predictions for the AL Central along with the rest of the American League: END_OF_DOCUMENT_TOKEN_TO_BE_REPLACED